Amazon Redshift is a cloud-based solution that falls under the Amazon Web Services umbrella. The low maintenance requirements, scalability, speed, and efficient compression features make it a popular data storage option for businesses dealing with large amounts of data.

To make data integration with this database easier, Astera Centerprise has launched a pre-built connector, allowing code-free connectivity to Redshift. This connector can be used as both a source and destination object to access and store data. Additionally, users can also connect to the Redshift database use it for DB lookup and SQL statement lookup.

How to Connect to Redshift Database with Astera Centerprise 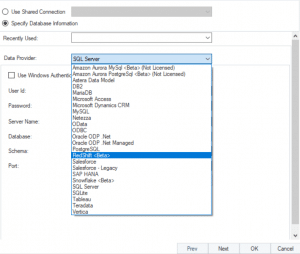 Redshift Database as a Source

Drag the database table source object from the toolbox and drop it on to the designer window to connect to the Redshift database and use it as a source object. Next, you can configure it by selecting Redshift as the data provider from the drop-down list. 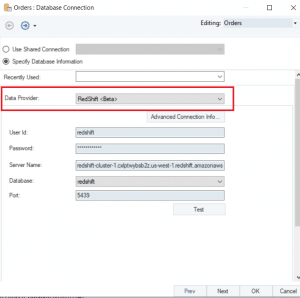 In the next step, we need to select the table from which the data will be sourced. In this case, we are selecting a table with order details named myorders123. We can click on the Partition Table for Reading option to break the table into smaller segments that will be read individually. This option can be selected to reduce load on the database and improve performance. Here, we also have the option to select multiple keys to divide the tables in partitions.

Another option in the database properties table is for specifying the Read Strategy. Here, we can decide whether we want to read the complete data (Full Load) or just updated records (Incremental Load Based on Audit Fields). 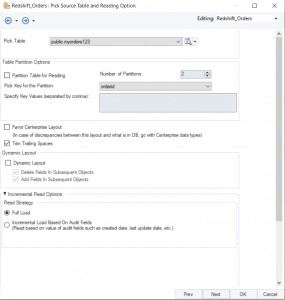 Figure 3: Specifying the source table and choosing the Read Strategy for the database source object.

The data from this Redshift table can be processed in multiple ways using various built-in transformations available in Centerprise and loaded to a file, database, or any other available destination.

Figure 4: A dataflow showing a filter being applied to data sourced from a Redshift table and mapped on to an Excel destination object

The screenshot above shows a dataflow that filters data from the Redshift_Orders table using a Filter transformation and mapped on an Excel destination file named FilteredOrders.

Redshift Database as a Destination 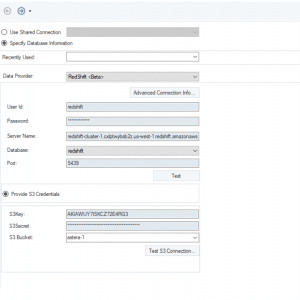 Figure 5: Configuring a database table destination object with Redshift as the data provider.

Once Redshift has been selected as the data provider, the user needs to decide whether they want to pick an existing table, create a new one, or overwrite the data present on an existing one. In this case, we have created a new table in the database and named it Marketing_Redshift.

The image also shows an option where users can add their Amazon Simple Storage Service (S3) credentials to load data in bulk to the Redshift database. 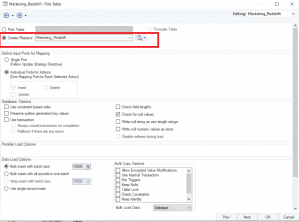 Data from an Excel source object named EmployeePayroll is then routed to the Marketing_Redshift database table. The complete dataflow is as follows:

Figure 7: A dataflow showing data of employees from the marketing department being routed from an EmployeePayroll Excel file and loaded to the Marketing_Redshift database table.

Data on the Redshift database can be compressed far more efficiently than on row-based databases, reducing processing time and time-to-insight. Owing to the benefits of Redshift over on-premise databases, businesses that need to store and process large amounts of data are looking for ways to create a well-connected enterprise ecosystem by connecting to Redshift. Unlike connectors that require a lot of manual configuration, Astera Centerprise’s Redshift connector makes accessing and storing data on the database very simple and convenient.

Users don’t have to go through a long and complicated configuration process to connect to Redshift. Establishing a connection is as simple as selecting the correct data provider from a drop-down list and pointing the database object to the correct table.

With the help of Astera Centerprise, users can automate their Redshift integration workflows to reduce time required for analysis and increase process efficiency.

Download the trial version of Astera Centerprise and make the most of Redshift connectivity.