We are thrilled to announce that we are releasing a new generation of our end-to-end data management platform – Centerprise Data Integrator 8.0.

Over the course of next few months, we plan on including several new features and make enhancements to the existing ones. The release plan for 2019 is designed to address commonly-faced data management challenges reported by our users.

Highlights of the 2019 planned enhancements are:

Introducing a leaner and lighter version of Centerprise Client

We have eliminated the logistical and maintenance barriers for IT administrators by moving the database driver assemblies to the Centerprise server. Now you can have Centerprise up and running in minutes instead of hours.

This year, we are working on providing the support for multiple foreign languages including French, German, Spanish, and more.

If your enterprise exchanges data in a foreign language, you might be interested in this update. Stay tuned!

We have also introduced cross-platform compatibility for Centerprise server. It can now be deployed on Linux OS and various versions of it. The underlying framework for Centerprise server is moved from .NET to .NET Core. Several enhancements in building the cluster database repository will also be shipped with this update.

See our product road map to get further details about our planned releases.

If you are interested in learning how Centerprise REST Server is designed and how your business can benefit from the update, keep reading.

What are RESTful APIs?

Let’s start with a basic introduction to the RESTful APIs.

APIs (Application Programming Interfaces) that are built on REST (Representational State Transfer) architecture are called RESTful APIs. Due to the lightweight, scalable, and easily maintainable nature of RESTful APIs, they have become the most-preferred choice when working with web-services and thus, have gained immense popularity in the recent years.

REST APIs work in a client-server environment where a client sends out HTTP requests to the server, the server retrieves the requested information, and returns a response back to the client. Data transfer and information exchange can take place either in XML or JSON format.

If you are interested in learning more about REST APIs, GET, POST, PUT, and DELETE commands, and the design constraints, refer to this article that discusses RESTful API design in detail.

Now that we have an idea of what RESTful APIs are, we can see how REST-based Centerprise server can leverage the REST API technology.

There are two main benefits that users will get from this update:

We used the way REST server and client systems communicate, i.e. with HTTP commands, and put that to our benefit to introduce an innovative implementation of client-server architecture. In this implementation, the Centerprise client is transformed into a lightweight application while major data processing and querying is off-loaded to the REST-enabled Centerprise server.

Why should this update concern you?

To understand this better, let’s look at the current Centerprise client-server architecture.

In the current Centerprise client-server application structure, Dynamic Link Libraries (DLLs) for database drivers are installed on individual client machines. If you have 50 clients connecting to a single server, you will need to replicate driver installation 50 times, which can create logistical and maintenance challenges. 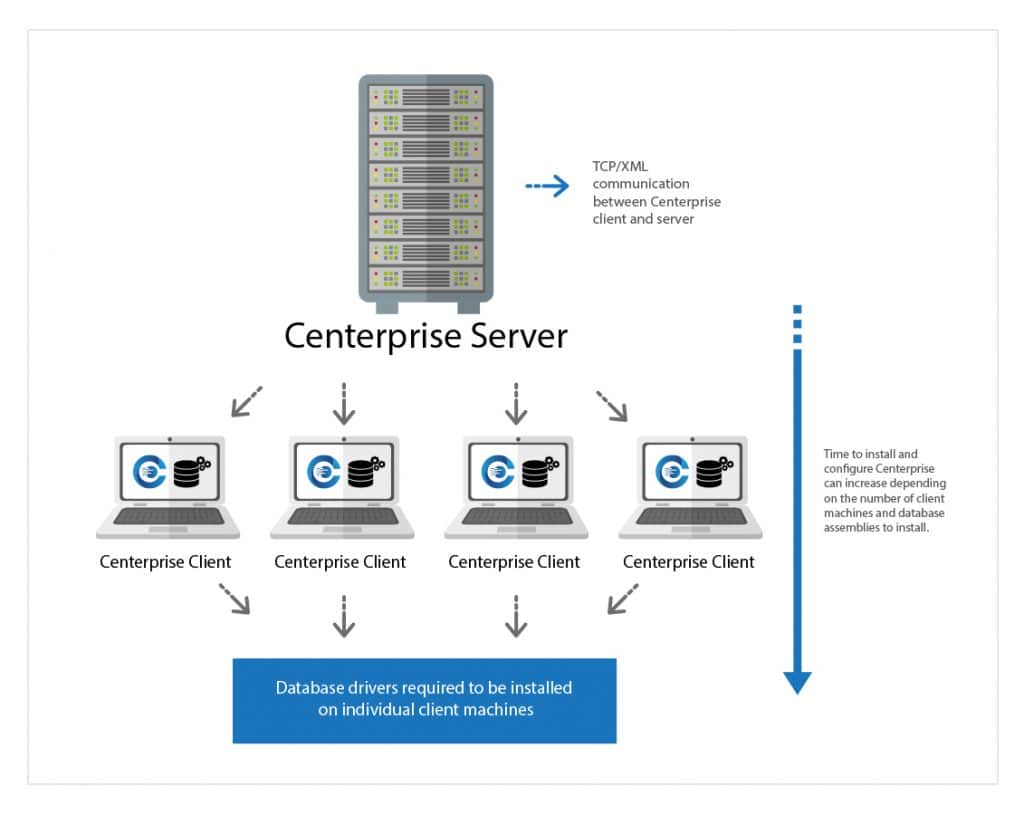 With REST-enabled Centerprise server, we have removed these barriers and made it incredibly easier for the users to install and set up Centerprise. Database driver assemblies are installed on the Centerprise REST server and not on the individual client machines.

When using the new REST server architecture, the client component sends out an HTTP request to the REST-enabled Centerprise server, the server processes the request call, establishes any necessary connections to the target databases using its own drivers, runs the query to bring the data requested by the client, and sends the response back to the client.

Other tasks such as getting data previews in the run-time and navigating object properties, are also delegated to the Centerprise server. 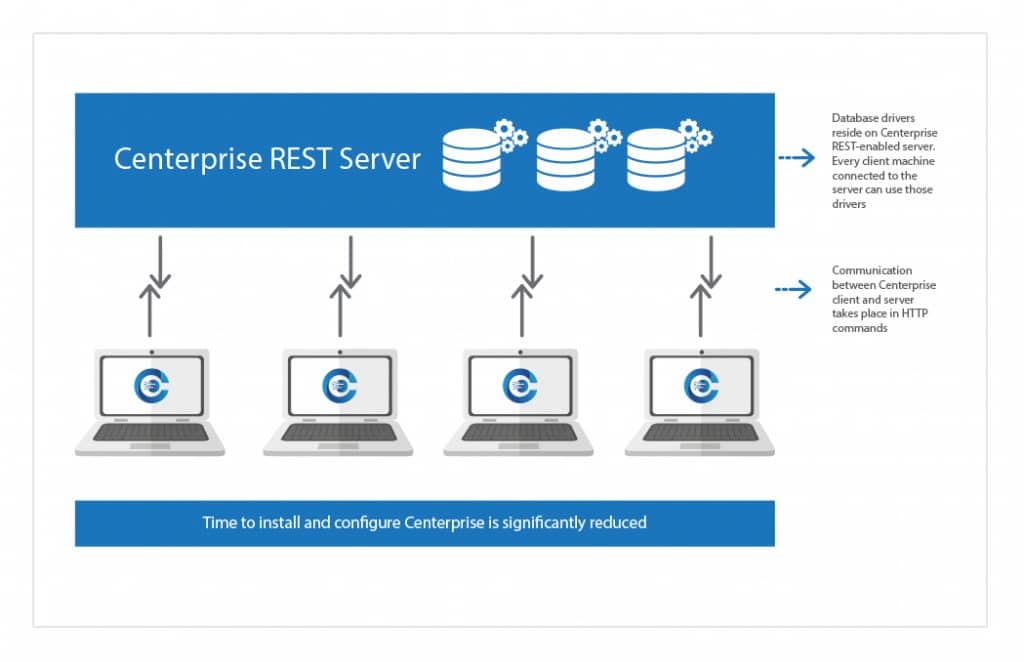 This update will yield significant benefits from IT infrastructure setup perspective. The installation and configuration time can be cut down from hours to minutes. Your organization can easily scale and add more clients to an existing Centerprise server without worrying about any additional driver installations and configurations.

For existing Centerprise users, if you are concerned whether this update will change how you design your ETL projects, dataflows, and workflows, the answer is no, it won’t. The dataflow and workflow design windows on the client application will work in the same way. We have only changed the communication method between Centerprise client and server – from remoting protocol over TCP to HTTP protocol over TCP.

Getting Started with Centerprise Lean Client

The following screen will appear when you will run the Centerprise light client. On this screen, you will specify the server information (Server URI and Port Number) to connect to the Centerprise REST-enabled server. 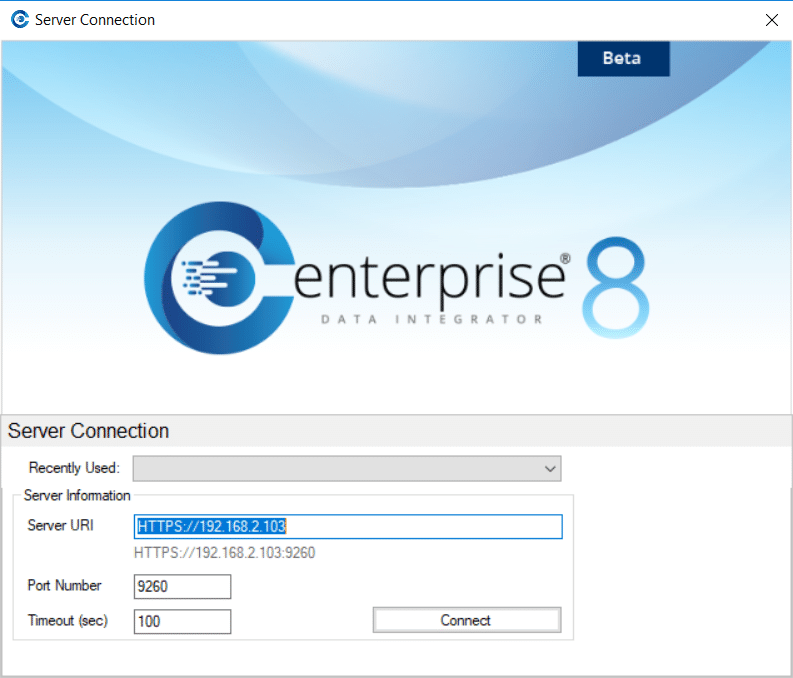 To learn more about how to automatically reconnect to a server on Client startup, read our complete guide on Getting Started with Lean Client.

If you have any questions or feedback about the Centerprise REST Server and Lean Client, leave them in the comments section below.